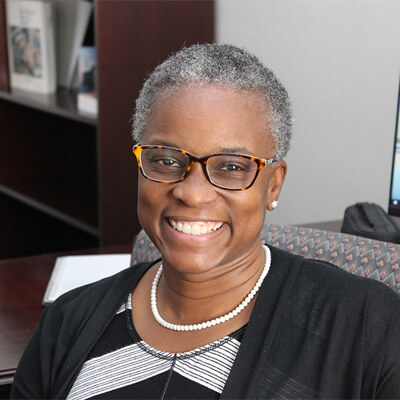 Dr. Alicia Battle lives by a mantra — an African proverb that states, “We are because I am, and I am because we are.”

This philosophy has fueled her over 22 years of experience in public health. Dr. Battle has worked as an HIV educator for sex workers in Illinois, special advocate for children in family courts in Alabama, and director of student wellness and outreach programs at a range of colleges and universities.

“The choices and decisions that I make have an impact,” she says, “not just on my team members and students, but also prospective students — those that hadn’t even thought about public health. And I get to do what I do because we exist.”

Dr. Battle came to Tulane University to educate campus faculty, staff, and students on their new alcohol policy, and ended up creating the Office of Alcohol Education. She is now associate dean for online programs at Tulane University’s School of Public Health and Tropical Medicine.

“Public health education and service is not something that I do,” says Dr. Battle. “It’s a lifestyle, and it’s who I am.”

Dr. Battle discovered the public health field by accident, like many students.

“I wasn't 11 years old saying, ‘When I grow up, I'm going to be a public health practitioner,’” she says. “People don’t usually know who we are until something like COVID-19 or Ebola happens, but that's the nature of the discipline. If we're doing our jobs really well, communities are healthy and thriving.”

Dr. Battle had also never seen herself represented in the classroom, even after earning her bachelor’s degree in philosophy.

“As an African American female in a philosophy program, I was the only Black person that graduated,” she says. “There were no other Black or Hispanic students in the program. And it was very male dominated at my institution at that time.”

She had, however, seen her older sister and brother-in-law both become attorneys. So she planned to go to law school.

“That made sense to me, and it was a way for me to use this philosophy degree, since law schools routinely recruit from political science departments, philosophy departments, and English departments,” she says. “But I was never intending to be a litigator. I wanted the law degree so that I could do advocacy work.”

Then, on a whim, Dr. Battle signed up for a class in epidemiology, the study of disease distribution and control.

“On the first day, the professor walked in, and she was the most beautiful Black woman I’d ever seen,” she says. “I had never seen myself in the classroom before. Being a PhD had never occurred to me.”

Dr. Battle soaked up the information Dr. Fleming had to offer, learning about what public health practitioners do and how they make major contributions to society by developing programs and services for communities.

“It was a three-hour class, and it felt like, ‘What, it's over already?’” Dr. Battle says. “Tuesday morning, I woke up, went to campus, and dropped my other classes.”

She has never looked back, and she has since been able to have that same impact on the young people she reaches through her teaching and practice.

“I’ve come into the classroom and realized, ‘Oh my God, I'm Dr. Fleming now,’” Dr. Battle says. “I’m that person that that Hispanic student or that Black student needs to see so they know that it’s possible.”

Dr. Battle is also passionate about sharing the myriad ways in which public health affects every aspect of people’s lives — from birth certificates and restaurant ratings to emergency relief and testing during a health crisis. In fact, when teaching an introductory public health class, she would tell students on the first day that they would get an immediate A and a $50 bill if they could tell her one aspect of life that public health does not affect.

Advocating for Communities Across the Nation

Dr. Battle became a public health advocate to help communities in need access lifesaving resources and services. As a young, single mom, she had family who helped support her through school, but she knows not everyone is as fortunate.

“I always had a lot of options because I have advocates built into my life,” she says. “I know that there are young girls that get pregnant or guys that get their girlfriends pregnant, and they don't have those options.”

While earning her PhD, Dr. Battle was an HIV educator for Region 5 in Illinois. She helped pass a law making HIV education mandatory for people convicted of a sex crime or drug-related crime.

“When I wasn’t in class, I was at truck stops and strip bars, providing education and condoms to sex workers,” she says. “I would hang informative bulletin boards in the dressing rooms for the girls, and I would decorate them and give them themes.”

Dr. Battle was also a teaching assistant at her university, and that job unexpectedly crossed paths with her work as an HIV educator.

“One of my students was a dancer and was mortified when she saw me at the strip bar,” Dr. Battle says. “It turns out she’d lost her other job, so I talked with her and connected her with campus resources like family housing.”

Dr. Battle went on to build a career-long dedication to working with students in various capacities.

“My practice setting was always colleges and universities; I love working with college students,” she says. “My area of research is the social epidemiology of substance-using behaviors among college student subpopulations. That's what I do.”

Dr. Battle became director of health and wellness education at Middlebury College and director of student involvement at the University of Alabama at Birmingham School of Medicine. She was responsible for developing wellness, mentorship, and leadership programming, and reducing issues with substance abuse.

Dr. Battle transitioned into teaching so she could have an even greater impact on students’ lives — just in a new role.

“I’ve not stopped advocating for students; I just advocate for them in a different way,” she says. “And I have more power to effect change as a faculty member and part of the faculty senate.”

As associate dean for online programs, Dr. Battle can also reach students across the nation. In her first MPH cohort, she had students from as far away as Alaska and as close as within the same building she works in.

“The bachelor's degree is like the high school diploma was 50 years ago; you have to have an advanced degree at this point,” Dr. Battle says. “Being able to matriculate online means that our degree program is now more accessible. If you live in a community that has a public library with internet connection, you, too, now have access to higher education.”

Online students also gain hands-on, interactive field experience through their academic residency. These are weekend- or week-long experiences hosted in different communities across the world. One residency focuses on sustainability and food insecurity and takes place in Rome, Italy, the home of the United Nations World Food Programme. Another on leadership in public health takes place in Atlanta, Georgia, where the Centers for Disease Control and Prevention is located.

“The academic residency brings the classroom alive and in a different setting,” says Dr. Battle. “Students look at different public health issues through the lens of a particular community, gaining skills in teamwork and interdisciplinary collaboration. It's an amazing opportunity.”

Students can also gain career support through the peer mentoring program, which pairs them with other students in accredited online MPH programs who have completed at least one year of academic work and have at least a 3.0 GPA. Participants are matched based on similarities in their demographics, specific career interests, and life experiences, if they choose to disclose them.

“They have someone they can ask, ‘How did you get through biostatistics online? How do you balance work and life? How much studying did you have to do for the epidemiology class?’” Dr. Battle says. “It doesn’t just provide students with a network but also teaches them invaluable skills in mentorship and communication.”

Overall, Dr. Battle hopes MPH students come away with three key lessons: 1. Public health touches every aspect of our lives. 2. Networking within and outside of the discipline is critically important to effect change in communities. 3. While sometimes the work of public health practitioners goes unvalidated, it is more important than any other discipline.

“You could probably live your whole life and never see a dentist, never interact with an attorney, never have a need for an accountant,” Dr. Battle says. “But there is not one person on this planet that can live without the contributions made by the men and women in public health every day — from the air that we breathe, the water that we drink, and the roads that we drive our cars on, all of that is connected. We are all connected by public health.”

Advance Your Career in Public Health

In 1912, Tulane University launched the first public health school in the United States, establishing its legacy as a leader in the field. The Online Master of Public Health degree program is designed to prepare working professionals for rewarding and impactful careers as public health leaders, advocates, researchers, and innovators. Award-winning faculty provide students with the knowledge and skills they need to implement lifesaving policies and create healthier communities around the globe.