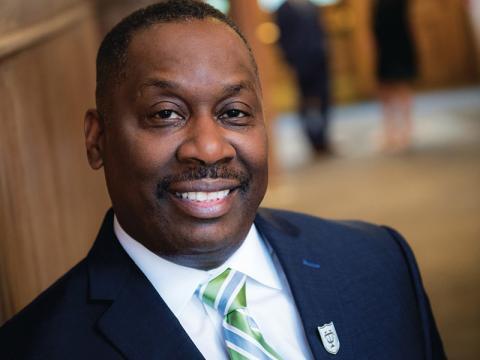 As of this writing, roughly 35 million doses of COVID-19 vaccines have been administered in the United States, yet January saw record-breaking surges of new cases and deaths throughout the nation. Louisiana was no exception, as the state experienced its third wave in the months of December and January. Despite states’ ongoing vaccination efforts, why have the numbers been climbing in many parts of the country?

According to Dr. Thomas A. LaVeist, dean and Weatherhead Presidential Chair in Health Equity at the Tulane University School of Public Health and Tropical Medicine, part of the reason may be that people are becoming more lax about observing CDC safety guidelines due to a false sense of security stemming from the vaccine rollout.

“It is riskier now to go out and be around people than it was in the past,” he recently told local television station WGNO, alluding to the higher case numbers. He added, “Maybe by the third quarter of this year we will be at a much better place, but as of right now, this is the riskiest time to go out without a mask.”

What will determine whether we’ll soon be in a better place or not will be how well people continue to observe safety guidelines (i.e., wearing masks, washing their hands,and practicing social distancing) and how smoothly and efficiently vaccinations go.

Unfortunately, the state-by-state approach to vaccination has been causing no small amount of confusion and frustration for people. A common problem is the combination of perpetually backed-up phone lines and websites that can’t keep up with the high demand. Even those who are in a state’s highest-priority category are having trouble scheduling vaccination appointments, and those who have already received the first dose are also having trouble getting the required second dose.

“State health departments are not well positioned to handle something of this magnitude,” Dr. LaVeist said in an interview with NPR. “Over the last 30 years or so, we’ve really divested the public health infrastructure and left that infrastructure significantly weakened.”

Dr. LaVeist believes that the federal government should assume a bigger, more central role of coordination, which the Biden administration has indeed been planning to do since the transition period leading up to Inauguration Day. One of the early major announcements of the administration's bolder approach was its plan to release all available doses of the vaccine in an attempt to hasten the process and ensure the most vulnerable people receive at least one dose.

Although Dr. LaVeist understands the tremendous pressure facing the Biden administration, he thinks this strategy might lead to some problems.

“I’m ambivalent about it, quite frankly,” he told WWL host Newell Normand in a radio interview. “I’d like to get as many people vaccinated as quickly as possible, but I do think that we could potentially face a problem on the back end if we are not able to provide that second dose as the manufacturers recommend. I’d prefer maybe a less aggressive strategy that would ensure we have enough doses to make sure everyone gets the second dose.”

In a full-length version of the WWL interview posted on Radio.com, LaVeist further explains that the reason for his concern regarding not providing people with the second dose has to do with mutations.

“Viruses mutate under any circumstance anyway,” he acknowledges, “but if people are only partially vaccinated, new mutations could develop that could be resistant to the vaccine, and that’s one of the things that concern me.”

Nevertheless, Dr. LaVeist remains optimistic that with a bolder approach from the new administration, enough doses of the vaccine can be produced and distributed quickly enough to get a significant portion of the population vaccinated by midyear.

The public can contribute a great deal to this process, moreover, if they continue taking the pandemic seriously and observing safety protocols. One of the barriers to this, of course, has been the ongoing politicization of the problem. Dr. LaVeist’s position on the matter reflects his scientific background and outlook.

“A virus does not care about politics,” he reminds us. “Unfortunately, politics have gotten so intertwined with the response to this pandemic. But viruses do what they do, and what they do is they seek to spread. ... If we can just get the politics out of it and just focus on being smart in our strategies to reduce infection rate, then I think we’ll all be better off.”