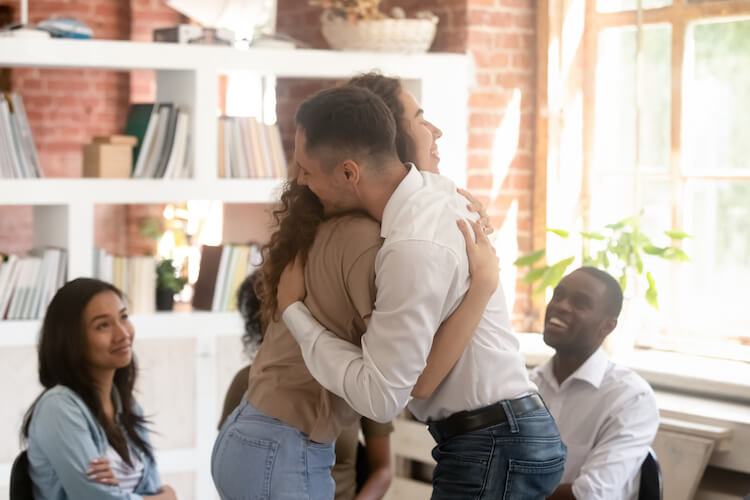 Every day, 130 Americans die from an opioid overdose; that adds up to more than 47,000 lost lives in a single year. In 2017, six times as many people died from prescription and non-prescription opioid overdoses as in 1999. These alarming statistics tracked by the Centers for Disease Control and Prevention constitute a public health crisis similar in scope to the 1918 influenza epidemic that claimed 675,000 Americans lives.

Today the annual deaths from opioid overdoses in our nation outpaces the annual number of homicides and traffic fatalities. And these statistics tell only part of the story. Millions of survivors living with opioid addiction have inadequate access to health services. The impact of the opioid public health crisis is staggering, and public health professionals play a significant role in addressing it.

In 2017, the federal government declared the opioid crisis a public health emergency. The buildup to this declaration started in the late 1990s, when pharmaceutical companies, including Purdue Pharma and Pfizer, began promoting prescription opioids as safe painkillers with a low risk for addiction. Prior to the 1990s, the medical community had viewed opioid drugs as highly addictive and avoided prescribing them. However, by 1996, when Purdue Pharma introduced OxyContin, a time-release opioid painkiller, that perception had shifted. A movement to prioritize the treatment of pain had gained momentum in the medical community, and with it the belief that opioids could provide safe relief to patients suffering from pain.

Unfortunately, that belief relied on unsound science and very limited studies. Nonetheless, pharmaceutical companies took note of the changed attitudes and saw a market opportunity. They began aggressively marketing opioids such as Vicodin, Percocet, and fentanyl to doctors and the public as safe options for pain management. In turn, healthcare providers prescribed opioids in increasing numbers.

Assurances that prescription opioids posed low risk for addiction proved inaccurate, however. The Centers for Disease Control and Prevention (CDC) have found that up to 29 percent of patients who are prescribed opioids end up misusing them. The CDC also reports that 3,442 Americans died from prescription opioid overdoses in 1999, and that number climbed to 12,796 by 2007. These deaths can be attributed to the tendency of opioids to cause hypoxia, a condition that prevents sufficient oxygen from reaching the brain. Hypoxia can result in psychological and neurological problems, brain damage, or death.

Many of those with opioid abuse disorders — patterns of misusing opioid prescriptions or heroin that can lead to uncontrolled cravings and physical and psychological harm — started with legitimate prescriptions for pain, but their initial use developed into a dependency.

Eventually, the increase of opioid misuse and the rise of prescription opioid-related deaths raised concerns attention. Public health professionals in government and other agencies saw the dangers these medications pose and urged doctors to scale back on prescribing them.

To compound the problem, today’s heroin is often mixed with synthetic opioids, such as fentanyl, carfentanil, xylazine, and U-47700, to increase its addictive qualities. The CDC describes fentanyl as up to 50 times more potent than heroin and carfentanil as up to 10,000 times more potent than morphine. These highly potent synthetic opioids account for the sharpest rise in opioid-related deaths, responsible for over 28,000 deaths in 2017 alone, according to the CDC.

Beyond the death toll of the opioid public health crisis, “The Economic Burden of Prescription Opioid Overdose, Abuse, and Dependence in the United States,” a study published in the journal Medical Care, estimates the nation spends $78.5 billion a year on treatment, prevention, and criminal justice expenses related to opioids. More importantly, opioid drugs plague families and entire communities across the U.S., reaching across age, race, socioeconomic group, and gender.

The opioid crisis is formidable — can it be stopped? Public health professionals believe there is a solution: developing partnerships with and among local communities and government agencies, as well as directly engaging with individuals struggling with opioid addiction. In addition, public health professionals can implement innovative prevention and treatment programs to rein in the crisis and offer relief to those already affected.

While the opioid crisis affects Americans of all backgrounds, some parts of the population find it much more difficult to access the health services and resources needed to prevent opioid abuse or help people recover from it. The CDC reports that people with low incomes, those on Medicaid, and residents of rural areas are less likely to have access to quality addiction treatment, and they are more likely to die from an opioid overdose.

What accounts for these disparities, and what actions will reduce these numbers in every segment of the population? Public health professionals are working to understand the contributing factors and thoughtfully design responses that address them.

For example, public health leaders created Project Lazarus for rural communities in North Carolina and other states to prevent overdoses and provide substance abuse treatment. The program distributes Project Lazarus Rescue Kits that contain nasal naloxone, a drug that inhibits opioid overdoses, along with educational information on how to revive someone who has overdosed. According to The Practical Playbook: Public Health and Primary Care Together, published by Oxford University Press, North Carolina saw 200 of these overdose reversals between August 2013 and November 2014, attesting to the effectiveness of the rescue kits.

Today, most states have passed laws to make naloxone more widely accessible, but, while efforts continue across the country, barriers to getting it still exist. Many police and fire departments still do not carry the medication, even though they often arrive first to the scene of overdoses. The cost of the medication might account for its limited use. . Regardless, some public health professionals advocate that policy makers eliminate the prescription requirement for the medication so anyone can obtain it.

One of the keys to fighting the opioid crisis is educational outreach. Tom Farley, commissioner of the Philadelphia Department of Public Health, implements creative solutions to beat the opioid crisis, such as the “Don’t Take the Risk” website, which presents stories from local Philadelphia residents to educate others about the dangers of opioid and prescription painkiller addiction. Such public health initiatives help spread the word about the risks associated with opioid addiction while putting a relatable human face on the issue.

Farley, who holds a Master of Public Health in Epidemiology from Tulane University, previously served as chair of the Department of Community Health Sciences at Tulane and director of the Tulane Prevention Research Center.

Public health professionals act as advocates and spur government initiatives to make health resources and services more accessible for individuals with opioid use disorders. As co-chair of a task force assembled by Philadelphia mayor Jim Kenney, Farley and the other task force members have worked on making naloxone more readily available. Aware of the life-saving potential of the medication, Farley recommends that “any person in Philadelphia who knows someone using opioids should carry it.”

Sometimes addressing public health crises calls for a bold or even controversial approach. For example, Farley supports opening comprehensive user engagement sites (CUES), places that distribute sterile needles and provide medical supervision to drug users administering drugs they obtained on their own. Beyond making illicit drug use somewhat safer, these sites can help people suffering from opioid abuse with referrals for treatment and recovery, as well as provide information that can prevent overdoses.

Another initiative addressing the opioid public health crisis comes from community health center programs, such as Health Care for the Homeless (HCH). HCH has lobbied for broader adoption of medication-assisted treatment (MAT), an approach to treating opioid addiction that incorporates counseling and therapy in conjunction with medications such as buprenorphine and methadone and can cut the number of deaths of patients with opioid abuse disorders in half.

For example, the course Community Training Methodologies prepares students to train community members to take on some of the duties of health care workers. This means that public health professionals can build a community of individuals who promote healthy practices. Students learn how to use participatory learning methods to train community members to develop opioid prevention outreach activities or even teach individuals with opioid abuse disorders how to avoid an overdose. Involving communities in improving their own quality of life by working with them to address health concerns and disparities is a key focus of this course, and of the MPH program as a whole.

Another course in Tulane’s MPH program, Health Equities and Public Health, focuses on community diversity and cultural humility to help graduates deliver public health programming to all communities. With this knowledge, graduates can help address some of the health disparities different communities experience in accessing treatment for opioid abuse disorders, as well as address the health care disparities in communities throughout the nation.

American Journal of Public Health, "Opioid Crisis: No Easy Fix to Its Social and Economic Determinants"

Drugabuse.com, “Why Is Heroin So Deadly Today?”

Medical Care, “The Economic Burden of Prescription Opioid Overdose, Abuse, and Dependence in the United States, 2013.”

National Institute on Minority Health and Health Disparities, Addressing the Challenges of the Opioid

Epidemic in Minority Health and Health Disparities Research in the U.S.

Pacific Standard, “Should We Blame Pharmaceutical Companies for America’s Opioid Epidemic? Here’s What the Science Says.”

U.S. Department of Health & Human Services, What Is the U.S. Opioid Epidemic?

The Wall Street Journal, “A Pain-Drug Champion Has Second Thoughts”