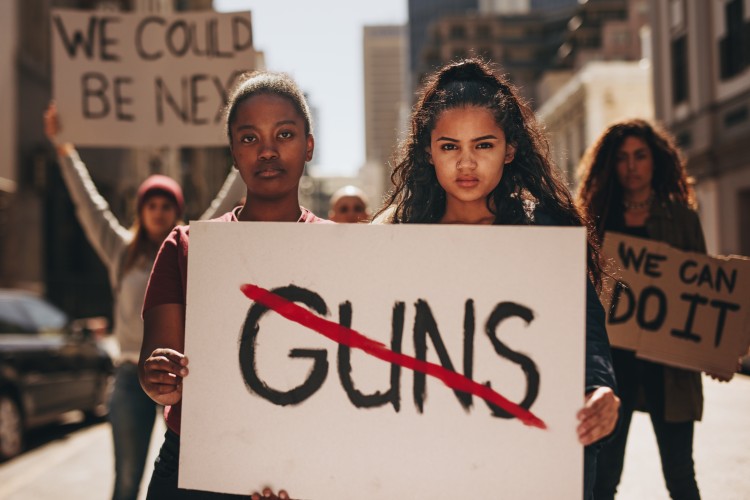 Gun violence takes a devastating toll in the United States. On May 24, 2022, an 18-year-old opened fire in Robb Elementary School in Uvalde, Texas, killing 19 children and two adults and injuring 17 people. Events like this are tragic and yet increasingly common. Every year, an average of 100 Americans a day die from gun violence, according to Giffords Law Center. To address this enormous cost, experts are calling for resources to study and combat firearm violence as a public health epidemic.

According to emergency physician Megan L. Ranney in Time, not treating gun violence as a public health issue but rather as a political issue to be debated has resulted in a failure to contain gun deaths. Gun-related tragedies continue to surge, from suicides to public mass homicides.

Every gun injury or death, whether intentional or unintentional, sows destruction in its wake. Societal costs of gun violence include:

A quick glance at gun violence statistics in the United States reveals why gun violence is a problem we cannot afford to ignore:

Barriers to Gun Violence Research from a Public Health Perspective

In 1996, the Dickey Amendment banned the use of government funds to advocate for gun control. As a result, commentators for Time argue that the public health approach to gun violence has been 50 to 100 times smaller, in terms of research dollars spent, compared to similarly lethal diseases and sources of injury.

In addition, reliable data on gun injuries and gun-related deaths is still insufficient, according to some public health experts.

But that is changing. In 2016, The Guardian reported that over 140 medical organizations called on Congress to “end the dramatic chilling effect of the current rider language restricting gun violence research and to fund this critical work.”

Why is a public health approach vital to preventing the damage gun violence inflicts on communities? The answer boils down to understanding the social and structural factors that predict gun violence.

Dr. Maeve Wallace, assistant professor at Tulane University’s School of Public Health and Tropical Medicine, describes a public health approach to gun violence as “the ability to see [gun violence] as a result of societal oppression and all these larger forces at play, and not just the result of someone who has criminal behavior.”

Rather, Dr. Wallace emphasizes that thinking of gun violence as senseless, random, or too painful to talk about hinders a proper understanding of the issue’s deeper causes.

“[Gun violence is] due to structural racism, classism, sexism,” says Dr. Wallace, “all these societal hierarchies that dictate who gets access to high-paying jobs, who gets access to college education, who gets to live in an environment that has safe houses and stable neighborhood opportunities.”

“How we shape structures, I think, is by policy,” says Dr. Wallace. Equitable, research-backed policies can “create better health-promoting opportunities for everybody.”

For example, Everytown for Gun Safety is a nonprofit organization that advocates for gun policy changes to close the “boyfriend loophole.” Everytown reports that nearly 4.5 million women have been threatened with a gun by an intimate partner. Of these, 1 million women have reported being shot at, or shot by, a partner.

The “boyfriend loophole” allows abusers to purchase and possess guns — even after they have been convicted of abuse, or are actively under a restraining order for abusing a partner. Everytown argues that policy changes could make it harder for convicted abusers to wield a firearm.

In sum, public policy requires research on the root causes of gun violence and what prevents gun violence. With proper funding, public health researchers can mobilize to study these causes and make evidence-based recommendations.

Steps to Approaching Gun Violence as a Public Health Issue

To address gun violence, more research is needed to understand its underlying causes and to assess policy responses to this ongoing crisis.

Steps to approaching gun violence as a public health issue include the following:

Public health experts who study gun violence can help to collect and analyze more accurate data about how and why gun violence occurs, and which policies are effective at preventing injury and death due to firearms.

Federal government officials only allocated $25 million to the National Institutes of Health (NIH) and the Centers for Disease Control and Prevention (CDC) for firearm injury prevention in 2020. This unfortunately does not yet make up for the decades in which little to no funding was available to public health researchers to study this deadly phenomena.

For public health researchers to effectively apply their unique skill sets to gun violence prevention, federal and state funding would need to increase, they say.

To address the enormous costs and meet the challenge of preventing gun violence, experts are calling for resources to study and combat firearm violence not in the context of gun rights or control, but as a public health epidemic.

Individuals interested in learning about promising research into gun violence as a public health issue can read about a variety of approaches here:

So long as there are guns, the specter of gun violence looms. But research shows that gun violence can be predictable and preventable when lawmakers, communities, and researchers join forces to apply a public health approach to understanding gun violence and halting it.

Guide to a Career in Public Health Research

What Is Healthcare Equity?

Everytown for Gun Safety, “Guns and Violence Against Women”

NPR, “The Tragic History of Police Responding Too Late to Active Shooters”

Time, “2020 Ends as One of America's Most Violent Years in Decades”

Time, “We Must Treat Gun Violence as a Public Health Crisis. These 4 Steps Will Help Us Reduce Deaths”