Home / Blog / Flood Preparedness: What You Need to Know

Flood Preparedness: What You Need to Know 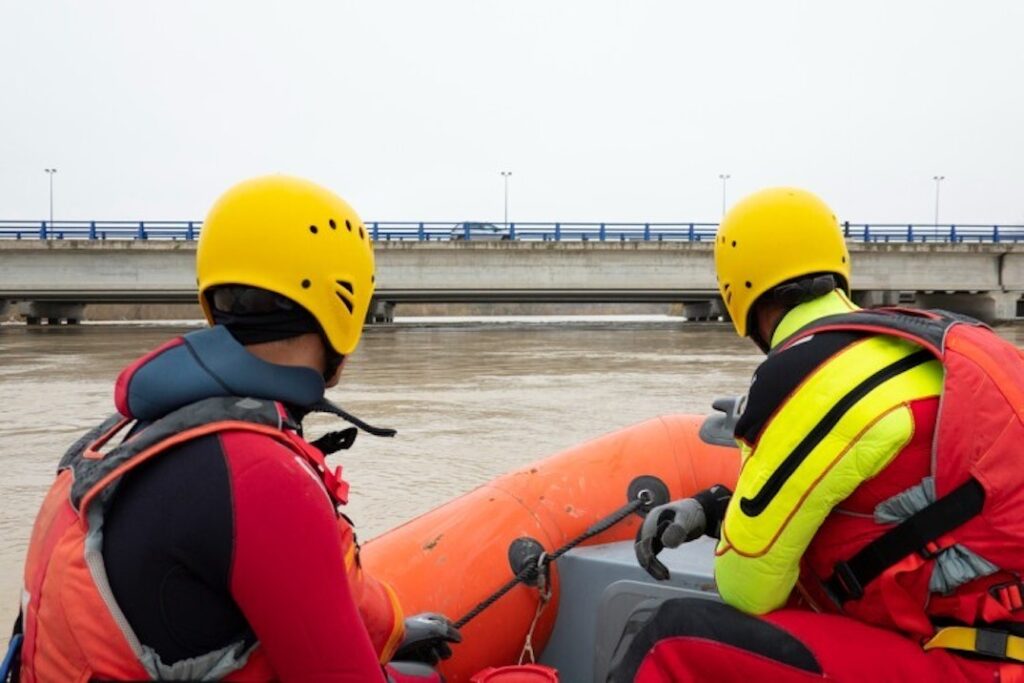 Around 90 percent of all natural disasters in the U.S. involve flooding, according to the Federal Emergency Management Agency’s (FEMA) National Flood Insurance Program (NFIP).

Flooding, a massive overflow of water caused by extreme weather conditions including sudden rainfalls, hurricanes, earthquakes, mudflows, or snowmelts, can cause billions of dollars in losses each year. FEMA calculates that the annual cost of flood damage is $17 billion nationally — as much as $25,000 for every inch of floodwater that flows into a home.

Given that flooding is costly and common, all people should consider their flood preparedness plans. Preparing for water-related disasters becomes easier with educational resources. Learn how to prepare for a flood, what to do during a flood to stay safe, and how to rebuild after flooding.

A flood involves water overflowing onto land that is typically dry. A flood can last for only a few minutes or carry on for entire weeks at a time.

The frequency of flooding in an area depends on how often weather events (such as heavy rain) occur in a given period. The size of a flood event (called magnitude) often depends on how much water enters the affected waterways — which can include rivers, streams, lakes, and canals — and how quickly.

Even floods that only result in a few inches of water can cause excessive damage to housing structures, farmland, and businesses — so understanding how floods happen is crucial. Learning the types of floods can also help you think about how to prepare your home for a flood and stay safe.

Why Are Floods So Common?

Any area in the world that experiences rain is at risk for flooding. According to the National Severe Storms Laboratory, run by the National Oceanic and Atmospheric Administration (NOAA), more people in the U.S. die from floods than from hurricanes, tornadoes, or lightning.

Flooding strikes every U.S. state and territory, and climate change experts predict that rising global temperatures will exacerbate flooding around the globe.

A reporter for the United Nations Environment Programme explains: “With higher temperatures, we have more energy in the Earth’s system. Higher ocean water and air temperatures increase the possibility for evaporation and therefore cloud formation.” With more clouds comes the possibility for more rainfall. “This can lead to an increase in precipitation intensity, duration and/or frequency.”

Cycles of prolonged summer droughts and heavy winter storms create conditions for flooding, too: Arid earth unsupported by vegetation may be unable to absorb an influx in water.

Flood risks increase in low-lying coastal regions and places where people have built on flood plains. Experts believe that massive flooding will likely occur with far greater frequency due to climate change, so communities must be prepared to face these extreme weather events even more regularly.

Regular flooding can help to support soil nutrition, keeping crops healthy and the land fertile. However, massive floods can decimate farmers’ crops, displace workers, and cause costly damage to homes, roads, and other crucial public infrastructure.

A huge flood can also harm communities by inundating their water treatment systems. Contaminants and sediment brought into water systems by flooding can promote the growth of harmful microbes that can make people sick if the water is not properly treated.

Damaging floods in U.S. history have killed thousands and cost billions of dollars in recovery, according to NOAA’s National Severe Storms Laboratory:

Coastal flooding occurs when high tide, heavy rainfall, and onshore winds (blowing from the ocean landward) push a mixture of coastal water and rain onto usually dry land. Even homes and businesses designed for seasonal storms (i.e., built on stilts or near a levee) may not be well equipped to deal with the sheer magnitude of a massive coastal flood.

Many areas of the U.S. experience shallow coastal flooding several times a year — including Savannah, Georgia, and Charleston, South Carolina — but these communities must now prepare for an increase in flooding frequency and magnitude as global temperatures rise.

While flooding can occur anywhere that water can find itself on normally dry land, NOAA lists specific areas at risk of flash floods.

Flash flooding is an extremely dangerous form of flooding. Flash floods occur with very little warning, barreling through streets into homes and businesses and leaving them awash with debris. Because they occur so quickly, emergency professionals have very little time to warn the public in the event of a flash flood.

The result? People — often those from vulnerable communities without flood protection or preparedness plans — may suffer damages to their property and livelihoods, not to mention risks to their own safety.

Areas NOAA warns are prone to flash flooding include:

A city’s density and limited green space may reduce the ground’s ability to absorb stormwater, causing water to pool in low-lying areas and flow into below-ground spaces. Hence, inland floods often cause damage to subterranean basements, garages, and subways.

Infamously, Tropical Storm Dennis and Hurricane Floyd combined to cause severe inland flooding in 1999, resulting in somewhere between $3 billion and $6 billion in damage, according to NOAA.

Coastal flooding and storm surges both involve massive amounts of water moving onto land, but a storm surge refers specifically to a harmful wave action that can batter buildings and destroy property through repetitive impact.

When ocean or lake waves roll inland, they can break against the shore in a powerful rhythm, wave after wave. Unlike a tsunami wave, which may be tall, storm surge waves are often short but persist over a long period of time. The water’s hydrodynamic force, combined with repetitive wave action, can be damaging and deadly.

Tropical storm activity (via hurricanes or cyclones) may push ocean water inland in waves over several hours — damaging buildings not constructed to withstand an onslaught of consistent wave-based force. Homeowners in coastal regions should consider not only the resilience of the levees and local infrastructure designed to protect the area but also the storm surge resilience of their own homes.

What to Do During a Flood

Robust flood preparedness includes knowing what to do and where to go during a flood.

If you have received a flood warning or a notice about a flood occurring near where you are, FEMA’s Ready Program (Ready.gov) offers the following instructions:

To find out if you are in danger from a flood, tune in to NOAA’s Weather Radio All Hazards. This nationwide radio station network broadcasts continuous weather information — including information regarding impending or ongoing floods.

People can tune to NOAA’s Weather Radio stations via the VHF public service band at the following frequencies:

If a local, state, or federal government agency tells people to evacuate, they should do so immediately.

Time permitting, collect essential items in a waterproof bag (such as a plastic freezer bag):

Unplug electrical appliances that could be affected by electrical surges and move any important items such as photos to a raised location or higher floor (if available).

If you get sick and need medical attention, Ready.gov recommends contacting your healthcare provider. Await further instructions and shelter in place, except in the case of medical emergencies — then, call 911. To find an emergency shelter near you, text “SHELTER” and your ZIP code to 43362.

Flooding can cause power outages and create all sorts of hazards that may make evacuation difficult or impossible: waste (industrial, animal, and human), lumber, debris, downed power lines, and stray animals including snakes and rodents. That is why you should seek safe shelter away from flooding as soon as possible.

If you live in a basement, monitor storms carefully and watch for running water. Basements and subterranean spaces flood first, so people who live in these spaces are at high risk. If you believe you may be in danger — or you notice water rushing in — leave immediately.

Move to a higher floor or evacuate to another location. FEMA warns people to avoid sheltering in closed attics, as people have become trapped and drowned by rising floodwater. If necessary, climb onto the roof instead, or leave immediately and head to higher ground.

If possible, check roadway conditions via news alerts before or while you seek shelter, and find safe evacuation routes. Avoid bridges, as fast-moving water can wash away bridges at a moment’s notice.

4. Avoid Swimming or Driving Through Floodwater

Driving into floodwater is dangerous and should be avoided in almost every case. The National Weather Service reports that nearly half of all flash flood fatalities happen in vehicles. Drivers often overestimate their vehicle’s ability to navigate floodwater — but floodwater is deceptively powerful.

Even large SUVs and pickups should not be driven through floodwater. NOAA states, “​As little as 6 inches of fast moving water can sweep most any vehicle off a roadway.”

It is almost impossible to determine the road conditions underneath the water. Flooding can wash out roadbeds and create sinkholes that can be invisible to drivers.

If you become trapped in your car in an encounter with fast-moving water, stay inside your car but prepare to roll down your windows (or break them) to escape to the roof if water begins to rise inside the car.

How to Clean Up After a Flood

Flood preparedness also involves consideration of what to do after a flood. Floods may last a few minutes or several weeks. After evacuating, people should only return home when emergency professionals say conditions are safe.

Ready.gov recommends taking the following actions after a flood:

Staying safe after a flood requires coordinated efforts by community members and coordination with local, state, and even national aid programs.

Insurance programs may offer flood protection and can help to pay for effective cleanup after a flood. Many basic homeowner’s or renter’s insurance plans do not include flood protection, however, so people should verify with their insurance provider that they have coverage before disaster strikes.

Flooding may cause extensive damage to a large area — including entire towns or cities — so rapid relief may not be possible. In the case of severe emergencies, people may need to prepare for unemployment or relocation until cleanup is complete.

While cleanup is underway, people with asthma and other lung conditions should not enter buildings with mold growth. Disaster cleanup may take months or longer, so people with vulnerable immune systems may need to prioritize relocating to a safe environment.

How to Prepare for a Flood

How to Prepare Your Home for a Flood

FEMA reports that people living in an area with low or moderate flood risk are five times more likely to experience a flood than a fire in their home over the next 30 years.

To prepare for a flood, consider taking the following steps outlined in coordination with FEMA and the National Flood Insurance Program:

Flooding is in many ways inevitable. With so many environmental causes — from heavy rainfall to snowmelt to tropical storms — flooding is likely to continue to affect families across the U.S. But the number of deaths and the financial costs of flooding may be kept low with proper flood preparedness.

Do you have an inner drive to protect the community from natural disasters? Explore Tulane University’s Online Master of Public Health in Disaster Management program, which prepares graduates to excel as disaster management experts. Learn the skills to manage local and global disasters with classes in disaster preparedness, crisis communication, psychosocial barriers to disaster management, epidemiology, biostatistics, and more.

FEMA, What to Do Before a Flood

The New York Times, “How to Stay Safe During a Flash Flood”

Rhode Island Department of Health, Flooding: About Cleaning Up